The TikTok app is certainly familiar to everyone who has spent time online in the last couple of years. ByteDance, a Chinese multinational internet technology firm, owns this social media network, which features a vast library of user-generated, brief video content.

These quick videos—which can be as brief as 15 seconds, 60 seconds, or 5 minutes—have made the globe aware of dancing crazes, hashtag challenges, and a tonne of useful tips. Brands trying to advertise their goods and services have also shown a strong interest in them.

So, What Is Douyin?

Douyin, TikTok’s Chinese version, is the only version of the app available to Chinese users. It’s been around since 2016. It’s owned by ByteDance.

App’s users receive a feed of video content catered to their interests and preferences. Just as those of TikTok’s international counterpart. Chinese Tiktok is heavy on entertaining, simple-to-consume video content and little on text and photos.

Douyin Vs TikTok: What’s The Difference?

Both TikTok and Douyin have similar appearances. Both of them are video content hosting platforms for entertainment, and they share many of the same fundamental features. The two video apps do differ in several significant ways, though.

🔥 How Douyin is Different From Tik Tok >>> Learn more here!

First off, if you want to reach Chinese users, you must open a second account on Douyin even if you already have one on the TikTok app. Users of Douyin and TikTok cannot access one other’s accounts, and the two applications function entirely independently of one another.

It enables in-video search, allowing users to look up a person’s face to discover more videos in which they appear. The app also makes it simple for consumers to look for and purchase goods that are mentioned in a video. Additionally, it enables businesses to link their account to their online store.

Users of short videos are increasing and using the services for longer periods of time. The number of Douyin (China’s TikTok) users there is anticipated to increase to 639.4 million this year. This indicates that a large portion of the Chinese public uses the platform for a variety of purposes, which makes it a great possibility for growing businesses. 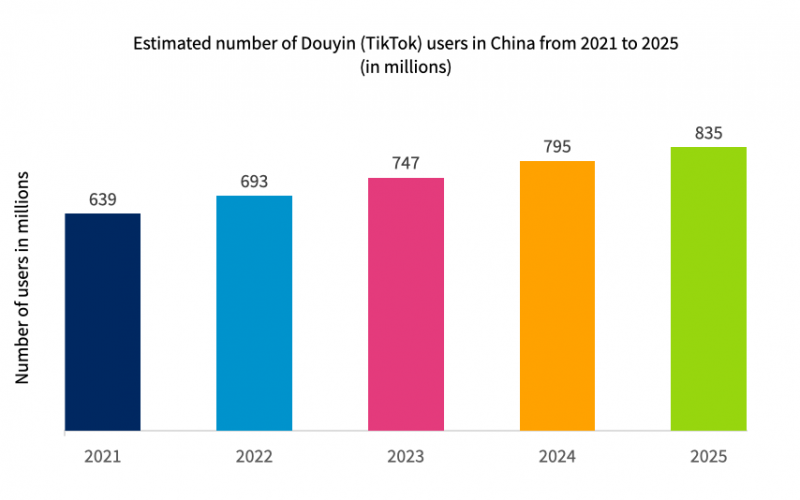 Short-video apps’ combination of engaging content and interactivity will entice more customers away from traditional players and into the eCommerce world. This shift in consumer behavior benefits apps like Douyin and Kuaishou over established e-commerce companies like Alibaba and JD.com. Players of short videos have made investments in their own commerce operations to keep users within their ecosystems, and the results have been encouraging.

But it’s not only Douyin that is enjoying tremendous growth. The short video sector has also maintained a stable development trend. The number of users reached 934 million MAUs in 2021. In general, the active user penetration rate has exceeded 80% due to the constant supply of short video content and the ongoing enhancements to platform ecology.

Another interesting thing is the time spent on the app. According to China Internet Watch, Douyin has the longest average monthly usage of 1,794 minutes, compared with Kuaishou’s 1,662 minutes as of June 2021.

According to ByteDance, livestream views on their respective Singles’ Day events in 2021 totaled 39.5 billion, and Kuaishou recorded a 433% increase in GMV. Beijing’s anti-monopoly crackdowns have also made it possible for sellers to list their goods on any website and have allowed platform-to-platform linking, both of which are positive developments for short-video players.

Why Should Businesses Use Douyin?

The number of daily active users on the app topped 600 million in September 2020, according to publicly available figures. There is a tonne of user-generated content on the platform, covering a wide range of topics that TikTok undoubtedly doesn’t cover. The majority of it is in Mandarin, and a sizable proportion of users are Chinese Gen Z. As a result, Chinese Douyin marketing and advertising provide limitless chances for global firms.

Over 89% of Douyin’s users are under the age of 40, and over 49% are under the age of 30. This makes Douyin a great platform for global firms as it accounts for around 50.8% of China’s population. 68% of all Chinese social media users have a Douyin account and routinely use it. 90% of Douyin users utilize the app many times per day.

Businesses can utilize Douyin for a variety of things, including product sales, influencer marketing, customer interaction, and more. Anything a company does with the platform is a terrific chance for developing companies to establish themselves in China.

➡️ Did you know? WeChat has a short-video platform now too! >>> Check here

As the statistics suggest, Chinese customers appear to be acquiring more and more short video content in the coming days. This indicates that Douyin is a great opportunity for businesses to establish a reputation in China and capitalise on the country’s sizable demographic.

If you wish to know more about Douyin or other short video platforms in China, please contact our team. We use our knowledge and expertise to help businesses build meaningful partnerships and develop their network among Chinese customers. For additional information, please contact at contact@thewechatagency.com.